This is Mr. Zinga and myself a few months before we had CeeCee. 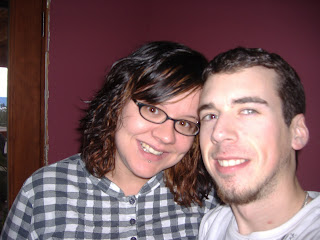 We're pretty cute, eh? It's been almost seven blissful years. This is by far the longest, happiest and healthiest relationship of my life.

We have the kind of love that Nicholas Sparks writes novels about, that 80's hair metal bands sing power ballads about. He writes me sonnets and leaves them on my pillow. We have lingering bubble baths, with candles and rose petals...*facepalm...I can't do it...I can't keep typing this crap with a straight face.

We don't do hearts and flowers. We're too busy being parents.

I'm not complaining. At all. I will take flannel jammies and a cup of tea with him over chocolate covered strawberries and champagne with anyone else, hands down. It's not a lack of passion, we have a different kind of passion. It's healthier. I really have it all. A lover, a partner, a friend and a family. I never had that with any of the so called "great loves" of my life. When I think of a person being madly or head over heels in love I picture them completely losing themselves in someone else. Everything revolves around the object of their affection...Every. Damn. Thing. Their heart skips a beat every time the phone rings just in case it's..gasp...HIM. They can't concentrate on work. Their friends can't stand to talk to them because they are sick of listening to the never ending saga, the ups and downs of the relationship. More often than not it burns white hot, like a holiday sparkler, and like a sparkler it burns out all to quickly. 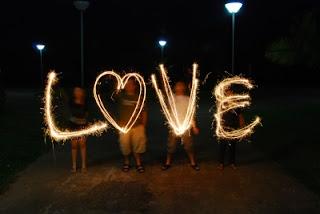 Don't get me wrong, we had that, for like ten minutes at the beginning. Doesn't everyone? Nobody would ever hook up in the first place if it wasn't exciting. What was REALLY special was realizing, after that first year or so when the novelty had worn off, that I still wanted to be with him. I wasn't trying to change him and he wasn't trying to change me (well, except maybe to get me to quit smoking but I can't blame him, it IS a filthy habit). Our relationship kept growing and evolving. We moved in together, got a dog, had kids, became a family. I eat the mushrooms that he picks off his pizza. He finishes my drinks so they don't pile up around the house (to this day I have yet to finish an entire can, glass or bottle of anything). He makes me laugh...a lot. We make mistakes...a lot. We raise our kids together. Life is good. We have been together long enough to cut through the crap and get down to the serious business of building a life together.

That's my idea of fun.

It isn't always easy, I'd be lying if I said it was. We fight. We're good at it. With two kids under two we have elevated bickering to a whole new level. Besides, anyone who says they never fight with their spouse is either lying or heavily medicated. No, we work at it. Some days it's more work than others. It's always worth it though. It isn't as flashy as a sparkler. It's more like a fireplace. Sturdy, useful and it keeps us warm at night. We keep it burning and it lights our home and our lives.


Show me a sparkler that can do all that.

Pin It
Posted by MamaZinga at 1:30 AM

You have found true love and I am so happy for you,after 32 years with Jeff we are still in love and feel that way too,enjoy your life my friend it only gets better!!!

MamaZinga
BC, Canada
About the author: MamaZinga is a thirty-something mother of two toddlers, and self proclaimed insufferable know-it-all. When she isn't pulling her hair out by the handful and grinding her teeth she enjoys reading, drinking wine out of a mug and referring to herself in the third person.